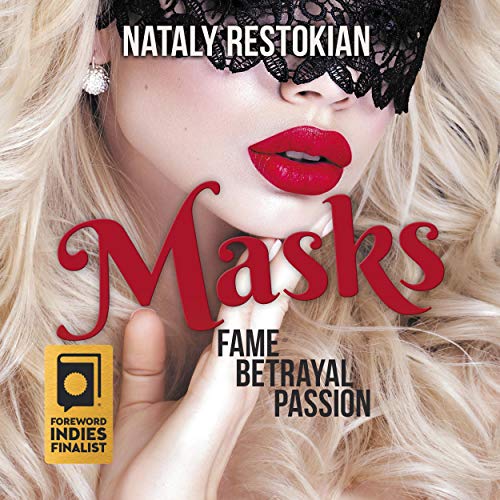 Masks is a dark fictional tale, based on true-life events. It narrates the adventures of a young Armenian girl born in Lebanon in the '70s. She dreams of fame and power in Lebanon and the Arab world and shows resilience and motivation beyond her years. The novel delves into the world of the protagonist, Anna, who is surrounded by social, religious, and sexual taboos. She fiercely breaks the chains to enter the world she has striven to reach, in a seemingly conservative society barely emerging from a civil war. She builds her success on her remaining values, challenging her fate and sparing no means to attain her goals. As a disappointment to her parents, she walks the challenging paths alone, making her way toward fame and fortune despite lacking the support system to do so. Doors begin to open for her, and she enters the world of Arab celebrities. She is now a public figure in the Middle East, living an immoral married life in a materialistic world surrounded by influential business people and royal family members. She tries, in vain, to fill the void in her soul with sexual adventures and controversy by taking a wide variety of lovers. Her adventures invariably end in misery, doing nothing to awaken her from her numbness. Still, her vivid, out-of-control personality helps her move forward while simultaneously getting her in trouble. In the early stages of her life, she has suffered the unthinkable, being bullied and raped, with the civil war a constant backdrop throughout most of her childhood. The novel delves deep into Anna's mind as she has flashbacks of the trauma she has suffered, offering the listener a hint of an explanation for her behavior. In a society in which men dominate women, she is one of the few who realize that fashion, social status, plastic surgeries, and bright smiles are not the answer to happiness. She lives in a world where a girl is only worth as much as her virginity, where women do not dare to ask for a divorce, where the fear of retribution keeps them locked in a cage that is very rarely gilded. As fame, money, and power slowly eat at her soul, the arrogant Anna falls in love with a total stranger - a young, single bachelor from Canada - after a night of secret passion. That is where the story begins to unravel as she returns home with a scandal in her back pocket, her eyes and ears and heart tuned to this man instead of her husband. Anna realizes that neither her marriage nor her achievements have ever made her happy, so she decides to throw it all away. The lies and deceit that fill the so-called glamorous life she has been leading are floating up to the surface, including her husband's infidelity and the critical steps she has taken to reach the top. Marriage, family, career - all destroyed to be united with the stranger. She starts a new battle, this time struggling to change her destiny for someone she barely knows, who lives oceans apart and offers her nothing except his heart. She risks everything, turning her whole life upside down. Anna realizes that her happiness, inner peace, and love are found worlds away from her own, with someone she would never have expected to be her soul mate. Still, Anna's sacrifices are not behind her, and the struggle has not yet ended, although she has found what she has needed all her life: redemption and unconditional love. The stranger enigmatically hints at emotions in Anna that have been hidden for a long time behind the masks of her dark and shallow lifestyle. The characters in the story are the voices of so many who do not dare to speak up in a world where social and religious standards openly chastise the very actions that behind closed doors have become the ultimate paradigmatic way of life.