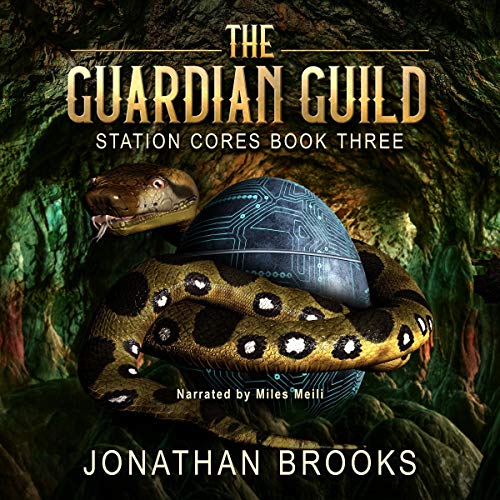 Stranded on an alien planet with his consciousness implanted inside of a Station Core, Milton Frederick has used all of the resources at his disposal to protect his damaged Core from local hostile beasts, Proctans, and even a massive bear-gorilla hybrid that almost single-handedly destroyed his dungeon. Milton is joined by his AI guide, ALANNA, as well as Brint and Whisp - two Proctans that have joined him in his endeavors; with the introduction of two new “recruits” - Rosewyn and Moxwell - they form a plan that enlists a few more Guardian Guild members to help combat the threat that Brint had discovered underneath the Quizard Mountains to the east. Unfortunately, not everything is going as well for the Guardian Guild, the organization tasked with defending the Proctan kingdom from the wild beasts roaming their borders. A political coup instigated by the Cordpower Company has upset the monarchial government and the Guild has been caught in the crossfire. Now, Milton has to figure out how to deal with that issue, while at the same time preparing for the inevitable arrival of the threat from the Quizard Mountains. Fortunately, new discoveries of his own has led to great strides in manipulating the Gene Mutations that affect the Proctans. Not only has the introduction of a Neurological Control Unit allowed for the manipulation of abilities, but it also provides something that will change the very nature of how the Proctans view death - and something that Milton, as a gamer, knows very well: respawning. But will those advantages be enough against the threat coming their way? Contains LitRPG/GameLit elements such as level progression and experience, optional tables, no harems, and a heavy Dungeon Core emphasis. PLEASE NOTE: When you purchase this title, the accompanying PDF will be available in your Audible Library along with the audio.