Those Who Dare Raiding Forces, Volume 1 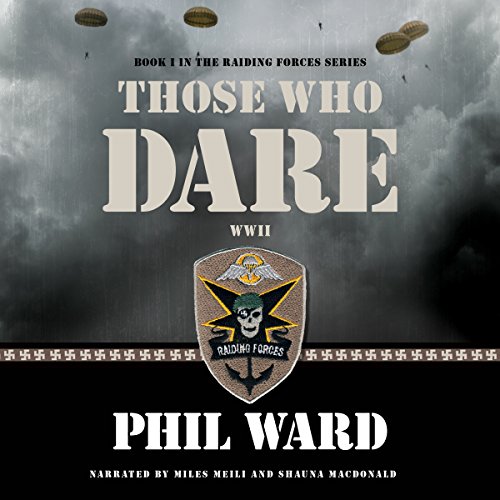 This is the first audiobook in the epic WWII Raiding Forces series. Meticulously researched (the author was an instructor at the Army Ranger School), the series begins with the birth of special operations - as seen through the eyes of a young American officer who has volunteered to serve with British Forces. May, 1940: 10th Panzer Division has decimated France and is driving on Calais a short distance from Dunkirk. Lieutenant John Randal, a veteran of the US 26th Cavalry Regiment, volunteers to serve with the British forces and arrives on the continent three days before the town falls. What unfolds is a blend of guerrilla tactics learned in the Philippian jungles, the first small-scale Commando raid, tough training at No. 1 Parachute Training School, suspense, humor, and a little romance with the drop-dead gorgeous widow Lady Jane Seaborn. The author - a decorated Ranger combat veteran - covers the details of war extensively, putting the listener right in the middle of the action. As the novel ends, newly promoted Major Randal, upon returning from the first British parachute raid of the war, is alerted that Raiding Forces will deploy within 48 hours via sea transport for their next mission off the Gold Coast of Africa.